Since we are honing in on Christmas, I thought I would share my family’s recent milestone on a touchy subject—Santa Claus.

I bring this up only because for the last 2-3 years I have been struggling with whether I wanted my husband and I to tell our kids the truth about Santa. Why? Well, for starters our oldest is 10 (going on 11) and still believes.

And while I think this is incredibly sweet, I also worry about him being ridiculed next year when he starts 6th grade. However, there is a much more important reason…

We are Christians, and as Christians I find it difficult to maintain the true reason our family celebrates Christmas while at the same time encouraging a false belief in the fairy tale, or mythology if you prefer, of Santa Claus.

Now, before you get upset please understand—I am in no way trying to change anybody’s beliefs, and I am not saying anybody is wrong for teaching their children to believe in Santa.

All I wish to do is convey the conflict I’ve been dealing with in my own heart, and explain why my husband and I finally decided to come clean to our children.

A few days before this our oldest lost yet another tooth. As usual, our forgetful Tooth Fairy forgot to do her job.

The next day while the kids were at school, I searched his bed for the tooth so I could leave his money knowing he’d find it when he went to bed that night. (At this point our kids are used to the Tooth Fairy coming late and/or during the day.)

Since I was unable to locate said tooth, when we got home, I questioned him about whether the Tooth Fairy had come that night or not. He told me she hadn’t so I asked him where his tooth was.

He stated that his tooth was on the bed post, and I replied that maybe the tooth fairy hadn’t come because she couldn’t find it. So naturally, the tooth fairy forgot to come that night too. (I know, I know… we are horrible at this game.)

So, the next day I go into his room and replace the tooth with money. I don’t know when he found the money because he never said anything to me, however the next day on the way home from school he complained that the Tooth Fairy only left him $0.50. (Yes, I’m a cheap Tooth Fairy, and besides the tooth had a cavity.)

It was at this point I made the decision to come clean to my kids that there really was no Tooth Fairy. While trying not to laugh, I explained that the Tooth Fairy was not real and that daddy and I are the Tooth Fairy’s.

I also explained that that is why the Tooth Fairy is so bad at her job (they know I am VERY forgetful). They were all pretty amused by this revelation.

It was my hope that with this new realization that the Tooth Fairy wasn’t real they would question the truth about Santa thus leading way to the all-important discussion:

Fast forward a bit, we are at home, homework is done and my oldest son is in the boy’s room talking to his dad on the phone while my youngest is in her room playing. My middle boy is sitting at the kitchen table doing whatever he is doing when out of nowhere he says to me, “Momma, I am thinking that maybe you give us our presents.” (Or something to that effect.)

First of all, I tried not to laugh because I knew he had been thinking over our Tooth Fairy conversation and making connections. (Clever boy.)

Things were moving in exactly the direction I had hoped they would.

With the other kids safely out of ear shot, I went and sat by him and explained that no there is no Santa Claus. I told him Santa Claus is just a fairy tale, but that it is based off of a real man named St. Nicholas who lived many, many, many, many years ago.

Being that he is only 7-years-old I knew it wasn’t likely that he would be able to keep this information to himself for very long, so I now had to let my husband in on what had transpired.

(I had no intention of taking things a step farther without first talking it over with him and finding out his feelings on the matter. I also needed to talk it over with my oldest son’s father to make sure he was on board.) 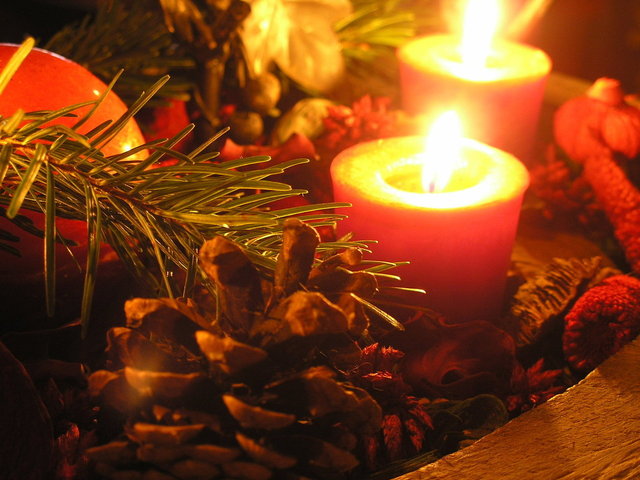 After my husband’s initial shock that I’d already told our middle child the truth about both the Tooth Fairy and Santa Claus, he and I agreed to go ahead and tell them the truth that evening. (My ex was also on board saying, “They have to learn eventually.”)

So, we told them the truth. But, as I said I would, I also went online and looked up information on the real St. Nicholas so they would know where our modern version of Santa comes from.

They had some questions of course, but the question that stands out to me most was the one that came from our six-year-old daughter:

Ouch. I told her the truth—growing up daddy and I were taught to believe in Santa Claus. When we had our own kids, we didn’t take the time to stop and think about whether we wanted to do the same. It was just tradition.

After telling our children the truth, we made sure to explain to them they cannot go to school and start telling all the other children Santa isn’t real because it will hurt their feelings and upset their parents.

We explained it is not our place to ruin something that their parents may still want them to believe in.

Of course, they said they understood.

(Unfortunately, you cannot tell your children the truth about something so big and expect them NOT to say anything.)

On Monday I get a message from our six-year-olds teacher saying I need to talk to her about going around and telling the class Santa isn’t real. She let me know it upset the other kids that do believe.

I apologized and explained that Friday we made the decision to tell our children the truth about Santa because we want the focus of our Christmas to be on Christ, but that we did explain to them they were not to go to school and tell all the other children.

She responded saying that she understood and wants to respect our daughter’s beliefs as well, but for her it is like walking a tightrope.

(Recently there was a substitute teacher fired from another school district for telling an entire class that Santa didn’t exist.)

I told her I understood, and I said I would have another talk with my daughter.

*sigh* So, after getting the children from school I nicely ask my daughter if she remembered what we talked about in regard to Santa Claus. She said yes and replied that they were not supposed to tell the other kids Santa wasn’t real.

She then proceeded to tell me that her teacher had read a book about St. Nicholas that day which resulted in her getting excited and wanting to tell everyone what she had learned.

She then told me that the other kids had gotten upset with her for saying Santa wasn’t real and that she was upset they were mad at her. I explained that that was another reason why she wasn’t supposed to tell her friends.

Once again, we discussed not telling the other kids Santa wasn’t real and this time I told her she should just play along with the kids who believe, OR tell them she doesn’t want to talk about it.

Fortunately, there hasn’t been an issue since. (Now she just plays along.)

So now we’ve told our kids the truth about Santa.

Though we have always taught our children that Jesus is the reason we celebrate Christmas, I realized that over the years we had put more emphasis on the fun of Santa rather than the gift of Christ.

I do admit, it is a little sad to have my children lose this bit of fun and fantasy. (Who doesn’t want their baby’s to stay young and innocent forever?)

But I can’t begin to tell you how much stress has been lifted off my shoulders. Not just the stress of trying to “keep up the charade” with this whole Santa Claus thing, but also the conflict I felt over lying to our children about it.

On a side note: We have, of course, explained to our children that Christ wasn’t actually born on the day we celebrate his birth—Christmas Day—but nonetheless it is the day Christian’s have chosen to celebrate.

I do not share this story to stir up debate or create conflict. It is not my intention to force my family’s beliefs onto anyone else, and I certainly am not judging anyone who teachers their children to believe in Santa.

As I mentioned early on in this post, I simply want to share the events of this major milestone that my family has just gone through.

As always, I’d love to hear from you. How old were you when you found out Santa wasn’t real? Did you tell your kids the truth about Santa, or did you let them figure it out on their own? How old were they? As for myself, I can’t remember when I stopped believing, if my parents told me, or if I heard it from friends.

If you enjoyed this post, give me a ‘Follow’ to stay up to date on future posts.

2 thoughts on “Santa Claus: Why We Chose to Tell Our Children the Truth” April Garcia may receive compensation for purchases made through affiliate link(s).